Maya and the Rising Dark (Hardcover) 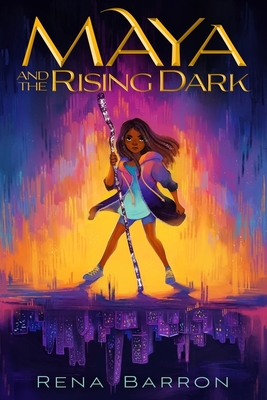 In this highly anticipated contemporary fantasy, twelve-year-old Maya’s search for her missing father puts her at the center of a battle between our world, the Orishas, and the mysterious and sinister Dark world. Perfect for fans of Aru Shah and the End of Time and The Serpent’s Secret.

Twelve-year-old Maya is the only one in her South Side Chicago neighborhood who witnesses weird occurrences like werehyenas stalking the streets at night and a scary man made of shadows plaguing her dreams. Her friends try to find an explanation—perhaps a ghost uprising or a lunchroom experiment gone awry. But to Maya, it sounds like something from one of Papa’s stories or her favorite comics.

When Papa goes missing, Maya is thrust into a world both strange and familiar as she uncovers the truth. Her father is the guardian of the veil between our world and the Dark—where an army led by the Lord of Shadows, the man from Maya’s nightmares, awaits. Maya herself is a godling, half orisha and half human, and her neighborhood is a safe haven. But now that the veil is failing, the Lord of Shadows is determined to destroy the human world and it’s up to Maya to stop him. She just hopes she can do it in time to attend Comic-Con before summer’s over.

Rena Barron grew up in small-town Alabama where stories of magic and adventure sparked her imagination. After penning her first awful poem in middle school, she graduated to writing short stories and novels by high school. Rena loves all things science fiction, ghosts, and superheroes. She’s a self-proclaimed space nerd. When she’s not writing, she can be found reading or brushing up on her French. Follow her at @renathedreamer and renabarron.com.

★ "Astonishing series of subsequent revelations leaves readers agog, eager to know how Maya and her pals will use their powers to heal the veil and save their mostly black and brown neighborhood.... A truly #BlackGirlMagic, cloudy-day, curl-up kind of book."  —​Kirkus, STARRED review

"This opening installment of what will be a much-anticipated series is fast-paced and adventurous, offering a fresh blend of culture, community, and folklore rooted broadly in the African diaspora."  —Booklist

"A fresh new fantasy adventure with epic stakes and a fierce heroine at its heart. This book will keep you turning pages well into the night!" —MarcyKate Connolly, New York Times bestselling author of the Monstrous and Shadow Weaver series

"Fantastically fun and full of characters I adore. I can't wait for Maya's next adventure!" —Stephanie Burgis, author of The Dragon with a Chocolate Heart and Kat, Incorrigible

"Maya is the kind of hero the whole world needs. If you're dwelling into the dark you couldn't ask for a better protector (or a better read)!" —Lamar Giles, author of The Last Last-Day-of-Summer

"In this unputdownable fantasy adventure, the clever, brave, and witty Maya takes a worthy place among the hall of fantasy heroes as she battles against drooling werehyenas, shapeshifting demons, and one seriously creepy Lord of Shadows. An irresistible ode to the power friendship, family, and community can have in the fight against the forces of evil." —Anne Ursu, author of The Real Boy and The Cronus Chronicles series