The Princess and the Pony (Hardcover) 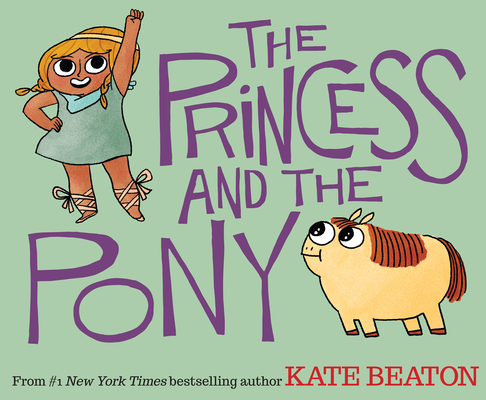 Princess Pinecone knows exactly what she wants for her birthday this year. A BIG horse. A STRONG horse. A horse fit for a WARRIOR PRINCESS! But when the day arrives, she doesn't quite get the horse of her dreams...

From the artist behind the comic phenomenon Hark! A Vagrant, The Princess and the Pony  is a laugh-out-loud story of brave warriors, big surprises, and falling in love with one unforgettable little pony.

Kate Beaton is the author of Hark! A Vagrant, her #1 New York Times bestselling collection of comics. Kate is the recipient of multiple Harvey awards, and her cartoons have been featured in the New Yorker. Kate lives in Toronto, and you can find her online at www.harkavagrant.com, or on Twitter as @beatonna.

Praise for The Princess and the Pony:

"I don't know how you make such a pretty book that has heart and wisdom and also a farting pony, but Kate Beaton does, and we are lucky that she does." -- Jon Klassen, Caldecott-winning creator of This Is Not My Hat and I Want My Hat Back

"It is the perfect, perfect book about girls, gender roles, and adorable ponies." -- Cory Doctorow, boingboing.net

* "[H]ip, modern, and absolutely refreshing... [T]his warrior princess breaks the mold -- and Beaton is in a class of her own." -- Kirkus Reviews, starred review

* "It's a smart, brisk story that tosses aside conventional ideas of what princesses (and ponies) are 'supposed' to be." -- Publishers Weekly, starred review

* "The perfect combination of heartwarming and hilarious." -- Booklist, starred review


Praise for Hark! A Vagrant:

"Not only fun, but also a good lead-in for teens who may want to explore authors and events they first discover in the riffs here." -- School Library Journal


Other Awards for Kate Beaton: